"It was a privilege to be a part of it" 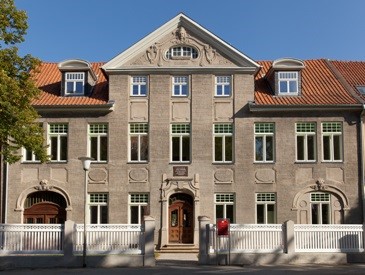 In the morning of 1 July, I stepped onto a train departing from my hometown of Uppsala in Sweden, and on Sunday afternoon on 2 July, I stepped off the train arriving in Wolfenbüttel, Germany. At the station I saw another traveller with a large bag. She looked just as confused as I was – she, staring at her iPhone GPS, and me, staring at my printed city map. I took the chance of asking if she perhaps was a participant in the summer school course “The New History of Archives”. My guess was correct. There aren’t very many people who take the commuter train from Braunschweig to Wolfenbüttel on a Sunday afternoon. It is a small town. Nonetheless, on the short way from the station to the Bundesakademie guesthouse, the two of us still managed to get lost in the winding streets – despite my map and her GPS.

Two weeks later, when I’d eventually head home to Sweden again, however, the idea of getting lost in Wolfenbüttel would seem absurd to me. For it took only a few days to become deeply familiar with the milieu of Wolfenbüttel Altstadt, the old town: the characteristic 17th-century German houses; the little brook bubbling beside the paved streets; the impressive Baroque ducal library, Bibliotheca Augusta, where we had seminars and did research during the days; the Biergarten where we met in the evenings. To be sure, I can hardly imagine a place more perfectly suited than Wolfenbüttel for mixing “business with pleasure”, perhaps typical of a humanist doctoral student on a summer research trip. The Altstadt is almost like a nature reserve for scholars (at least those who are interested in the early modern European period). It offers a decent number of eating places, beautiful parks to wander in, a few museums to visit and not least of all – an atmosphere of calm and quiet. 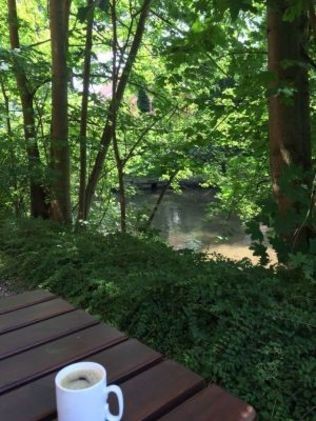 Picture of an afternoon coffee, by the tables in the garden behind the Bundesakademie guesthouse.

There are attractions to be sure, but not too many to take away the focus from what most likely is the core purpose of the visiting scholar: the outstanding collections of the Bibliotheca Augusta. For my part, it was a moment of sheer joy when I sat in the manuscript reading room and received a handwritten book containing the story of Abraham of Wormbs, in the hand of Duke August himself, in a beautiful velvet-clad volume kept inside a casket with its own lock.

Speaking of “core purposes”, I should mention that the “New History of Archives” summer school really allowed and encouraged us participants to engage in the most central, or at least most stimulating, part of being an academic: critical discussions. In the course meetings, a number of important researchers presented their perspectives on early modern archives. As a seminar group, we then discussed texts which play a central role in the current epistemological turn towards the materiality of archives within the field of history and cultural history. We likewise reflected on different theoretical concepts and presented our own research. Apart from all the specific pieces of valuable information, the greatest benefit I gained from these meetings can perhaps best be summed up as a generally widened horizon in my field of study.

Our little flock of master’s and PhD students came from different disciplinary backgrounds and from various countries and language areas. Still, what we had in common, beyond the shared situation of being in academia, was our interest of early modern archives. During such an intense course, there is naturally plenty of time to discuss many other things besides archives, and one does indeed have the opportunity to get to know one’s colleagues well. Although conversations went high and low, we often returned to the topic of archives, and this was certainly strange to me: to be able to use experiences from archival cellars as a never-failing conversation starter. But far from making small-talk, comparing our different archives and archival approaches also led to synergetic effects. I, at least, felt a sense of contextual belonging when discussing my own research project in the frame of these discussions – inside and outside the seminars. This, of course, is the whole point in having this type of activity: bringing together people with similar ideas and similar interests. The great thing about the summer school was how well this idea of intellectual sociability worked out in reality. It was a privilege to be a part of it.

Tim Berndtsson is a PhD Student at Uppsala University. He is currently working on a doctoral thesis with the preliminary title “The Order and the Archive. Masonic Archival Culture in 18th century Europe”